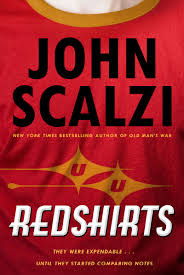 On its face, Redshirts by John Scalzi is a book I should have loved. It’s got space travel, it’s got time travel, and it’s got a big fat awareness of the culture of TV. But I didn’t love it. In fact, saying I liked it would be a stretch.

Redshirts is set on the star ship Intrepid, which is not unlike Star Trek‘s Enterprise and is part of a Universal Union that is not unlike Star Trek‘s Federation. But Intrepid has a (familiar)  problem: Its junior officers keep dying on away missions. The story focuses on a handful of new arrivals to the ship who notice the pattern and, as the jacket says “compare notes,” to try to stay alive.

It sounds like a good idea — a space comedy adventure that gently ribs on a beloved space show. Unfortunately, its main characters are all borderline obnoxiously witty and about as interchangable as the Trek redshirts they’re based on.

It also reads really long. The main story (excluding the three supplementary codas at the back) is 230 pages, but the first 50-some felt like 100. That’s not necessarily bad. The first review I did since moving to WordPress commented on the slow-burn nature of Fahrenheit 451, after all, but I spent a lot of time on Redshirts cycling between mildly interested, outright irritated, and a little bit bored by a book that tried way too hard to be clever.

To be fair, part of why I disliked Redshirts comes from my own personal filter of experience, but the above is what I think is some pretty objective criticism and about as far as this review can go without getting into a pretty surprising plot twist.

So, for those who wish to stop here, I’ll leave on a positive note, by saying there was at least one scene that was very exciting and good, and it reminded me of my favorite gag reel clip from Serenity:

Now, back to Redshirts and the plot twist that cut off all circulation.

About midway through what I was expecting to be a decent, if somewhat slow story that turned the “redshirts always die” trope on its ear, the characters start investigating why the Intrepid seems to have so many more junior officer deaths than other star ships, and it turns out there’s only one that had more: The Enterprise. Yes, that Enterprise, which is just as fictional in Redshirts as it is in reality. And so, naturally, that leads the characters to assume that some time in the early 21st century, there’s a TV show about the Intrepid, and it must be that,  periodically, their missions and fates are determined by whatever happened on this show way back when. And so they go back in time to try to affect the TV show and change their fates. As you do.
And this is where it really started to lose me. Not because the idea is silly, but because examining narrative and arcs and tropes — the way stories are built and live and cross mediums is something I already do, so watching these characters do it  just…isn’t all that interesting. And let’s be honest,  fiction-intersects-with-reality is also a concept I’ve seen before (and written myself in high school and college), so again, it just feels tired with prose that is merely sufficient — certainly not stellar.

But for me, its final nail in the coffin was the treatment of the genre. The Star Trek mentions felt like blatant name-drops that kind of reminded me of Ready Player One by Ernest Cline. But if Ready Player One ultimately felt like a love letter to gaming culture, Redshirts feels like a slap in the face. It takes care not to trash Star Trek directly, but there are only so many times I can listen to characters (including its fictional writer) crap all over the “bad writing” of the Chronicles of the Intrepid before I get grumpy.

It reminded me of two things I see all too often when perusing forums for other shows. First, there are the people who tie themselves in knots because not every single character who has ever shown their face on a TV screen is given a full, rich backstory, and — oh, the horror — some of them even die to further the plot of the main characters. Such is the nature of a 44-minute TV show. It is not real life, no matter how many times Redshirts characters try to convince people it is (or how easy of a job they have at it).

And really, that kind of flows into the second thing I see, and the one that finally made me close Redshirts halfway through the first coda:  the downright glut of people who never have anything to offer but negativity and the assertion that “they can’t trust the writers” to do good things. I don’t like that sentiment in real life, and it’s even worse in my fiction, even when it is hidden in the low self-esteem of a TV-writing character.

Because it’s one thing to not like a particular story line or a new character, or even an entire book or season, but if you can’t trust the writers of your entertainment to entertain you at all, do what I did, and stop consuming what they’re selling. You’ll feel better, and I’ll be less annoyed.